Silvester in Holland am Meer

Silvester am Meer in Scheveningen

WHO Silvester in Holland am Meer If you want to celebrate, there is no escaping Scheveningen. The largest bonfire in the world takes place there every year! Every year, a team from the north and south beaches compete for the biggest fireworks display. The bonfire is now considered an “Intangible Cultural Heritage”. Best to drop by in the afternoon and see how the guys line up. The best view in the evening is from the boulevard.

Most people in the Netherlands celebrate it at home. That is why no buses or trams run in The Hague from 8 p.m. to 9 a.m. and taxis are also difficult to arrive that evening. So you have to stay in The Hague, but in Scheveningen Silvester If you want to celebrate, you should keep in mind that you have to go by bike or by car. Many restaurants are also closed. The good news: most places around the tourist hot spots, like Kurhaus or Boulevard, but are also open on New Year’s Eve.

Sleeping in is not that! On January 1, the big New Year’s dive will take place on the beach of Scheveningen. The perfect cure for the hangover. Up to 10,000 people dive together in swimming trunks in the cool water. Then there’s a bowl of pea soup and hot chocolate. The proceeds are also donated to a good cause. 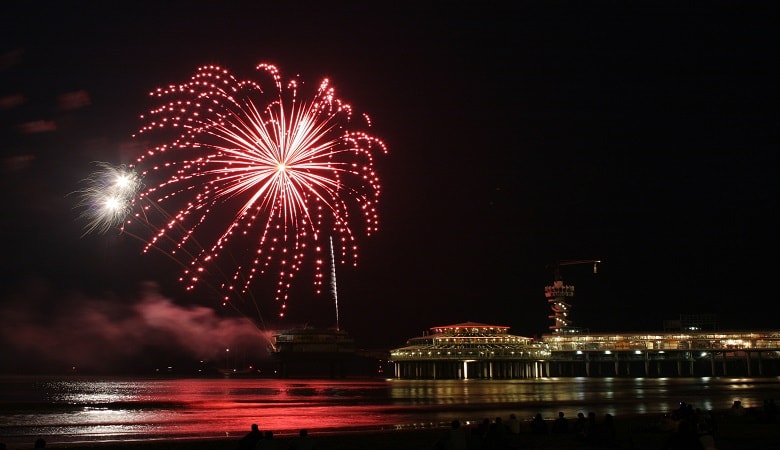 Silvester am Meer in Scheveningen 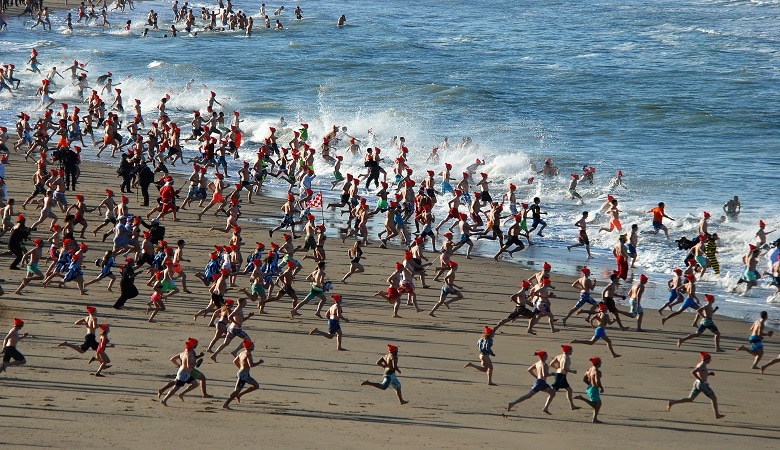 New Year’s Eve by the sea on Texel

Do you want New Year’s Eve by the sea on Texel spend? Good idea! It is best to start the day with a walk on the beach or in the dunes. In the evening you can celebrate exuberantly. The island is very cozy at this time of year, shops and restaurants are nicely decorated and everyone is looking forward to the New Year. From 6pm to 2am it’s everywhere – fireworks are set off all over the island. Fireworks are prohibited on the island for the rest of the year.

And for the intrepid among you, there is also the traditional New Year’s dive on Texel. Sleep well, strengthen yourself with a hearty breakfast, you can enter the water from 2 p.m. On the beach of Texel you dive into the water together with other brave people. The hangover from the previous day is quickly forgotten!

Silvester am Meer in Zeeland

If you want to approach the New Year a little slower, you are closed Silvester in Zeeland In good hands. Away from wild parties and big fireworks, the beaches of Zeeland are perfect for a relaxing, romantic New Year’s Eve by the sea with your loved ones. Explore the many pretty towns on the islands during the day and stroll along the beach in the evenings and enjoy time for two. And who knows, you might be able to marvel at some of the surrounding fireworks at midnight!

And if you’re looking for a little action the next day, you can – how could it be otherwise – jump into the sea on January 1 with many others. The annual tradition of the New Year’s Dive inspires locals and tourists alike every year. One of the hotspots for this is Domburg, the oldest seaside resort in Zeeland. 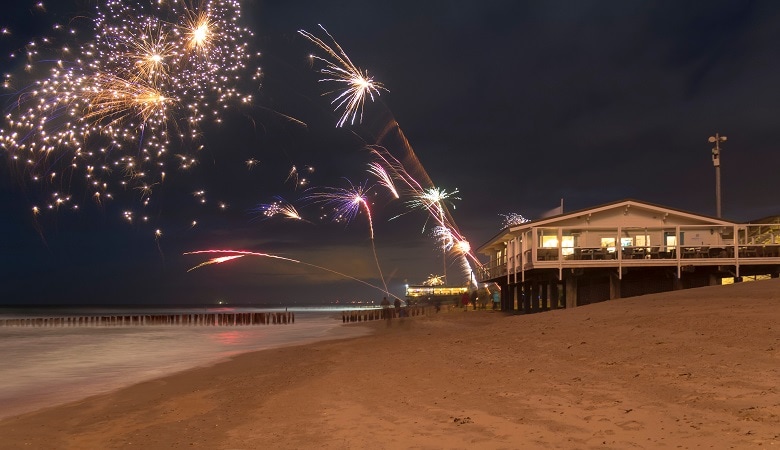 Silvester am Meer in Zeeland

in the mood for New Year’s Eve by the sea for two? Very romantic and quiet? Then on to the Dutch North Sea coast to Zandvoort aan Zee. Silvester in Zandvoort aan Zee is free from noisy parties and crowds. Here you can relax and let the old year end and slide into the new. Take a romantic walk on the beach and let the cool North Sea breeze blow into your face. Then you can have a delicious dinner in one of the nice restaurants. But be careful – many restaurants are closed on December 31, so it’s better to call ahead to make sure! At midnight, toast to the New Year’s Eve on the beach and admire the fireworks on the surrounding beaches.

Silvester am Meer in Kiel

You want New Year’s Eve on the Baltic Sea celebrate? You’re in good hands at Kiel’s biggest New Year’s Eve party! You will find different rooms here, so that every taste is catered for. You can celebrate New Year’s Eve with your friends cheaply when the interior of the arena is converted into a party location. The gala area is a bit more luxurious, but certainly not quieter! At midnight there is a fireworks reception over the roofs of Kiel, where you can toast to the year 2022 with your loved ones. Young or young at heart, everyone gathers here to say goodbye to the old year and welcome the new! 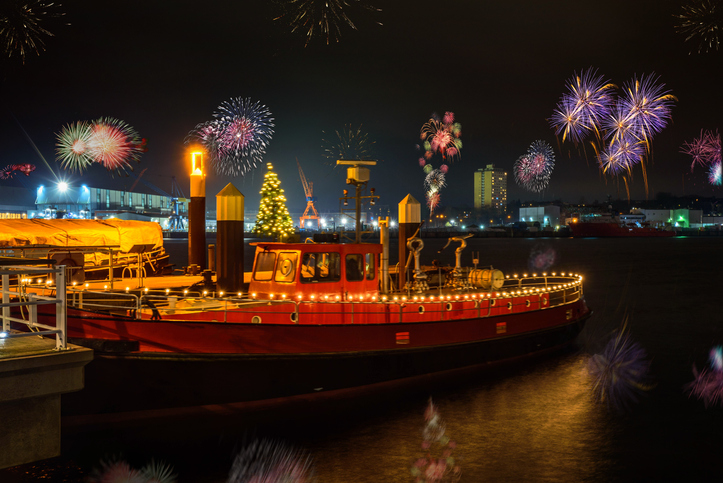 New Year’s Eve in the Port of Kiel

New Year’s Eve by the sea in Kühlungsborn

Where is it New Year’s Eve on the Baltic Sea the prettiest? Kühlungsborn is clearly leading the way! So off to the Baltic Sea coast for the New Year’s Eve party in Kühlungsborn. The coastal town hosts an open-air New Year’s Eve party from December 28 to January 1. You can celebrate it in two different locations – on the one hand at the open-air party on the forecourt of the pier and at the same time there is a marquee on Baltic Platz. On December 31, at 8pm, moderation will begin in the forecourt of the pier, where the dance will begin with a mix of well-known and modern music. The climax then follows at 12:10 pm, where a gigantic fireworks display is set off.

Do you need to cool down the next day? Then be sure to take part in the traditional New Year’s bath – including classic bathing suits. Jump into the cool Baltic Sea with hundreds of swimmers and ring in the new year in style. 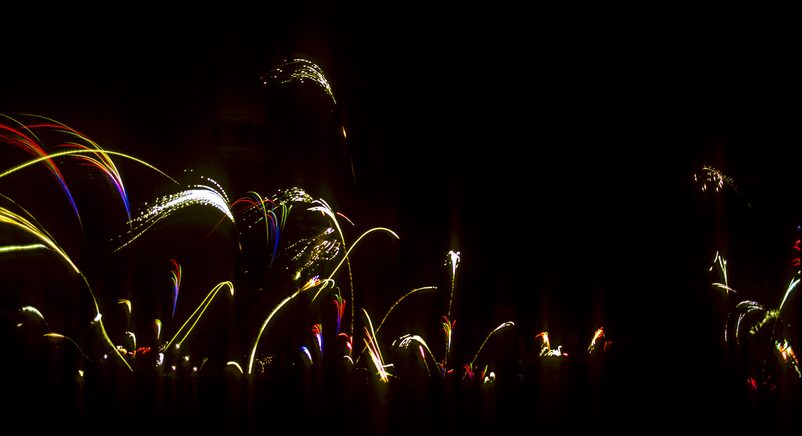 New Year’s Eve by the sea on Timmendorfer Strand

Fancy a New Year’s Eve beach party? Then you should New Year’s Eve at Timmendorfer Strand can not be missed. There the New Year is celebrated with a big party right on the beach. With a mix of current hits and oldies you will dance towards 2022. Shortly before midnight you can count down together with about 15,000 visitors and then ring in the new year with traditional waltz dances. With this crowd, you don’t have to be afraid of New Year’s Eve rockets wandering aimlessly. Fireworks are only allowed in a cordoned off area – that’s where you can light any rockets you’ve brought along! And best of all, entry to the New Year’s Eve party at Timmendorfer Strand is free. If that’s not a great opportunity to New Year’s Eve by the sea to celebrate. 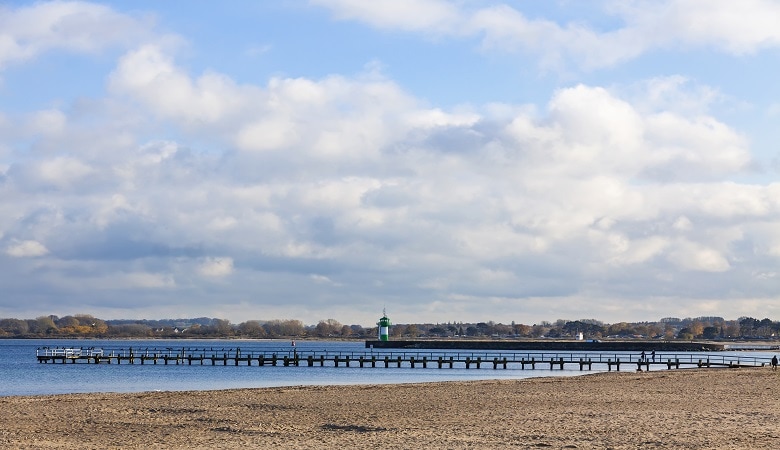 New Year’s Eve by the sea on Timmendorfer Strand

New Year’s Eve by the sea in Großenbrode

Do you want this year New Year’s Eve cheap celebrate, but don’t miss a party? Then celebrate New Year’s Eve on the Baltic Sea in Grossenbode! A grand New Year’s Eve party starts there from 6.30 pm, where you can dance into the new year. And all this with free entrance! At exactly midnight, the year 2021 will be ushered in with a large, colorful and musical fireworks display. Then, when the year is still young, the party continues into the early hours. Sounds tempting doesn’t it? So let’s go to the OpenMeer New Year’s Eve party in Großenbode – certainly one of the most beautiful places for New Year’s Eve.

New Year’s Eve by the sea in Travemünde

New Year’s Eve in an atmospheric ambiance – that’s how it can be New Year’s Eve by the sea in Travemünde describe. The festively decorated Brügmanngarten invites you to ring in the new year with your loved ones. Under the motto “Winter magic by the sea”, a winter wonderland by the sea already arises between the years, with New Year’s Eve as the highlight. The indoor event location will be converted into an exclusive party location where you can experience the perfect New Year’s Eve by the sea. There is also an open air dance floor. In the Winter Lounge you can toast a little quieter to the new year. Three large fireworks will frame your New Year 2022 – the climax takes place at 12:20 PM. 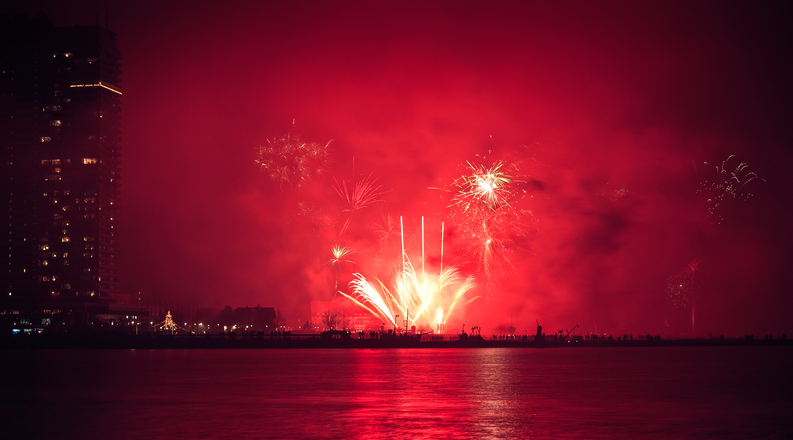 All hotels for New Year’s Eve on the Baltic Sea

Have we been able to raise your expectations for the coming New Year’s Eve? Then let’s go grab your loved ones and celebrate New Year’s Eve 2021 by the sea!

New Year’s Eve with a difference: this is how you celebrate New Year’s Eve 2021 by the sea was last modified: October 8, 2021 by means of Emine